The time of the monastery foundation is uncertain and those involved in detecting it failed to present convincing evidence for their views.

What we know for sure is that the small temple of the monastery that its feast-day is celebrated on the Birth of the Virgin Mary, was the central point of the monastery. The frescoes that were uncovered underneath the whitewash from the technicians of the Archaeological Service, lead us to the 14th century and it is the oldest part of the monastery buildings. It was demolished and built like a fortress-type monastery but it is not clear when and there is only a little evidence leading to the end of the 16th century.

The official designation of the monastery, Panagia Akrotiriani was replaced during the 17th century to Toplou, according to the official documents and as indicated by the 15th or 16th century seal.

In 1673, the monastery was referred to for the first time as the Monastery of Toplou, according to a Turkish document. According to the historians of the monastery, this name is derived from the word for cannon in the Turkish language, which is top, because in fact there was a small cannon at the monastery, since the Venetian Period, as a defense against pirates and in order to notify the surrounding villages for the imminent danger.

There are a lot of theories but the most convincing one seems to be the one stating that the name may be derived from the syncope of the Greek word “to plou(sio)” which means “rich” (referring to the monastery), because the monastery had an extensive property, while it is still generally referred to as “The Great Monastery” by the locals.

In a short time, the new monastery had a great fortune mainly from donations of rich people of Sitia. Its land covers an area from Kavo Sidero to Pilalimata.

It also founded churches throughout Crete that were dependent on her, as Panagia Tavradiani or Akrotiriani in Kritsa of Mirabello, a small monastery in Heraklion area referred to as Panagia Akrotiriani.

The monastery was also closely-related to the popular Paplinou Monastery in Ierapetra, while the well-known monasteries in the area of Sitia, Agia Sofia Monastery in Armeni, the Monastery of Panagia Faneromeni in Trachilas area and Kapsa Monastery were certainly after their decline under the supervision of Toplou Monastery.

During the years of the Turkish occupation the monastery suffered badly because it was a shelter for persecuted and a centre for the Revolutionary movement, while its property was subject to predatory dispositions of the Ottomans.

Regarding the latter, according to tradition the Janissary Braim Aga Kasapis who often plundered the monastery, was killed by a Turk who was told to do so by the monks. It is said that the corpse of the deceased janissary fell from the animal to which it was loaded, at a short distance from the monastery, at a location that to this day is called the “the creek of anathema”.

Following the Revolution of 1821 in the Greek mainland and the strict orders of Sultan Mahmud to the local rulers of Crete, the local governor of Sitia Ibrahim Afantakis began slaughtering the provinces (Chochlakies, Tourtoulloi, Ziros, Achladia) and did not spare the lives of the monks in Toplou.

Upon surrender, the monastery was looted and 12 monks were slaughtered at the entrance to the monastery, known as the Door of Lodz.

In 1828, it was the turn of the Turks to fortify the monastery, where they were besieged by a revolutionary body led by Ioannis Kontos, Ioannis Makris and Iosif Dermitzakis from Sitia. The Turks were forced to surrender but the monastery suffered retaliation.

During the period from 1828 to the revolution of 1866, the great reputation of Toplou was about to regain its economic strength. After the outbreak of the Revolution, Turks were headed to the monastery in order to arrest the abbot Meletios Michelidakis, who was a member of the Revolutionary Committee of Sitia. Michelidakis managed to escape to Kaso and other monks to Symi. However, a group of them failed to escape and were betrayed and arrested in the dependency of Analoukas.

There is no information but only some evidence that there was a hidden school operating in Toplou monastery during the Turkish occupation, but it is certain that in 1870 a cooperative school was established there.

Furthermore, the exact number of monks in the monastery at different periods of times is not clear, except for 1881 when 26 monks and 54 servants were inventoried.

During the German occupation, the monastery was a wireless base and in 1944 Germans arrested and executed the abbot of the monastery Gennadios Syllignakis, from Sfakia to Agia in Chania, while other monks were tortured and imprisoned. Syllignaki’s bones were transferred in 1955 to the memorial structure outside the monastery.

The monastery has been restored many times and is considered to be one of the most remarkable Cretan monasteries. It is the only monastery that has survived among a lot of large and small monasteries that once existed at the region of Sitia and were destroyed by the liberation wars and the plunder pirates.

In recent years, Philotheos Spanoudakis has established a Museum of Copperplate Engravings and Greek Folk Engravings produced by monks in the 18th and 19th centuries. In the museum, unique icons and religious art objects are on display, such as Gospels, silver-gilt crosses, Patriarchal Sigils, Sultan’s Decrees, seals, revolutionary banners, vestments, etc.

Even today, the monastery is affluent because it produces organic products, such as wine, raki, tsikoudia and olive oil while an olive mill, and an olive oil bottling unit, a winery and a wine and tsikoudia bottling unit have been built. The extra virgin olive oil of Sitia from Koroneiki variety of olives, has received international awards from the European Union. In addition, the findings of the chemical laboratory of the Ministry of Development are positive for this oil. Moreover, it produces some varieties of wine, such as white Thrapsathiri and Vilana and red Merlot-Syrah that have already become a reference point like the sweet red wine from raisined grapes from Liatiko variety. The products exported by the monastery are marketed under the brand name “Toplou”. 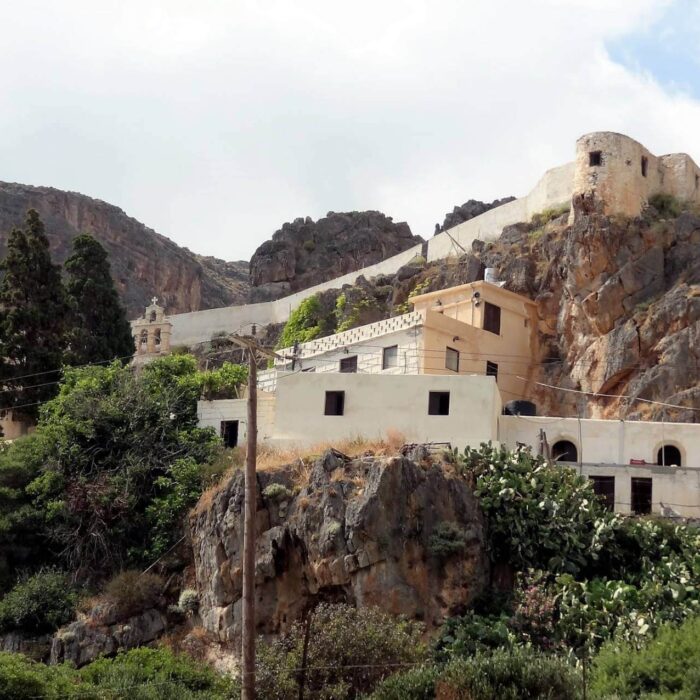 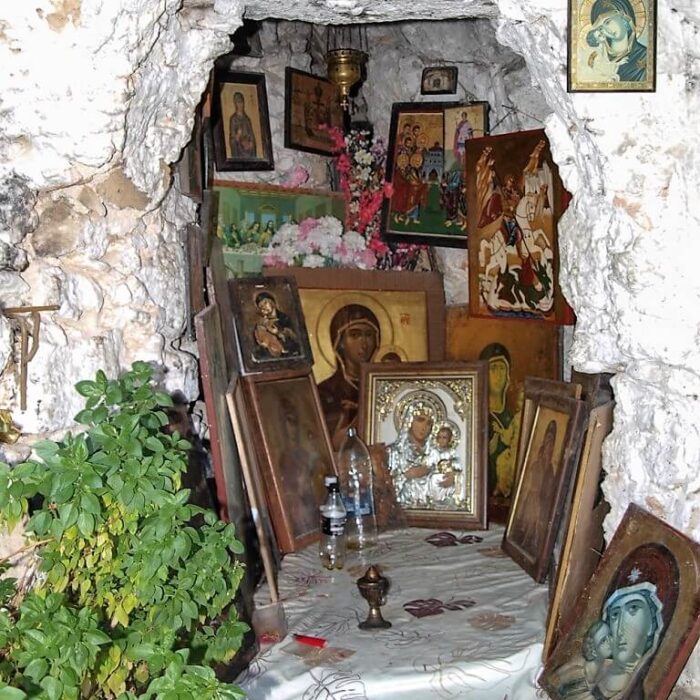 THE MONASTERY OF PANAGIA FANEROMENI